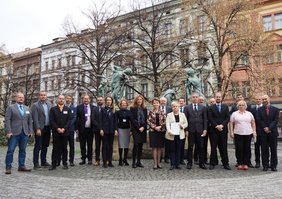 An International Atomic Energy Agency (IAEA) team of experts completed a nuclear security advisory mission in the Czech Republic, which was carried out at the request of its Government.

The International Physical Protection Advisory Service (IPPAS) mission, conducted from 8 to 19 November 2021, was the third such IAEA mission in the Czech Republic, following one in 2002 and one in 1998.

The scope of the two-week mission included a review of the legislative and regulatory framework for the physical protection of nuclear material and associated facilities and activities including transport. The team also reviewed information and computer security arrangements; regulatory practices in licensing, inspections and enforcement; coordination between stakeholders involved in nuclear security; and the interface between nuclear material accounting and control and nuclear safety.

The IPPAS team also reviewed the country’s implementation of the Convention on Physical Protection of Nuclear Material (CPPNM) and its Amendment, which the Czech Republic accepted in December 2010.

The team was led by Nancy Fragoyannis, Senior Level Advisor for Non-proliferation and International Nuclear Security at the U.S. Nuclear Regulatory Commission (NRC) and included seven experts from Finland, Germany, Hungary, Poland, Switzerland, the United Kingdom and the IAEA. They met in Prague with officials from the State Office for Nuclear Safety (SÚJB), as well as with representatives of other relevant ministries and governmental organizations, including the National Security Authority (NBÚ), National Cyber and Information Security Agency (NÚKIB) and Police of the Czech Republic.

The IPPAS team visited the country’s two nuclear power plants located in Dukovany and in Temelín in the south of the Czech Republic, as well as the nuclear spent fuel storage facility at the Temelín nuclear site. During these visits, the team met with the representatives of the operator of these two plants, the ČEZ Group.

“The findings of the international experts’ team reflect Czech Republic’s systematic work in enhancing nuclear security procedures and practices in alignment with the provisions specified in the CPPNM and its Amendment, as well as with relevant IAEA nuclear security guidance,” Elena Buglova, Director of the IAEA Division of Nuclear Security, said at the mission closing ceremony in Prague. “By hosting IPPAS missions and supporting their conduct in other countries with subject matter experts, the Czech Republic reinforces the efforts being made towards a high level of nuclear security globally.”

„The positive results of this IPPAS review provide SÚJB with another confirmation of the good direction of our efforts in improving the national safety and security framework,” said Dana Drábová, President of SÚJB.

The mission was the 95th IPPAS mission conducted by the IAEA since the programme began in 1995.

IPPAS missions are intended to assist States in strengthening their national nuclear security regime. The missions provide peer advice on implementing international instruments, along with IAEA guidance on the protection of nuclear and other radioactive material and associated facilities.

During a mission, a team of international experts observes a nation's system of physical protection, compares it with international good practices and makes recommendations for improvement. IPPAS missions are conducted both on a nationwide and facility-specific basis.

WebArchiv
The site uses only non-persistent technical cookies strictly limited to what is necessary for the website operation. It is not required to obtain the visitor’s consent for storing these cookies.